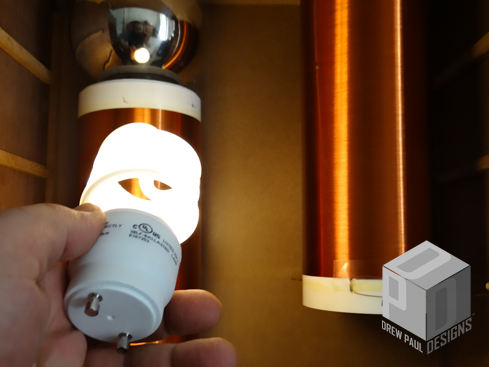 In brief, wireless transmission of electricity is a reality… and the results are astounding!

Nikola Tesla, a little known scientist of the late 19th and early 20th centuries, is the modern day discoverer of the technology with allows for every wireless device you use. Yes, all of them. Tesla knew what electricity was and was therefore able to manipulate it in ways not seen for as many as a thousand years. Every cell phone, radio signal, broadcast TV signal and remote control is a result of his research and experimental data.

All of the scientists and inventors who wrote the formulas we rely on and the technology we use knew the nature of electricity, knew what light was and understood magnetism and gravity, scientists like Faraday and Maxwell. Nikola Tesla was no exception.

Nikola Tesla knew that light, electricity, magnetism and the like were all a variation of an oscillating frequency. They’re all waves, energetic oscillation through the medium which surrounds us.
A Tesla Coil is a device used to transmit electricity wirelessly. The Tesla Coil is composed of two coils of wire of varied gauge, length and turns which acts like a transformer. In the example above, an L2 coil of 2000 turns of 32AWG is wrapped with a L1 coil of about 5 turns of a 14 gauge. The L1 coil couples to the L2 without contact, or inductively, resulting in a voltage increase of several orders of magnitude. The L1 coil is powered by a 12 volt circuit which, by a clever configuration of a resistor, diode and transistor, self regulates to produce a resonance between the coils. This is topped with a conductive orb or toroid to distribute this frequency.

Here is how it works. It is very much like spinning a merry-go-round at your neighborhood park. A merry-go-round is a large heavy round surface that spins on an axis. These can weigh several hundred pounds and are quite difficult to get going. However, once spinning, the merry-go-round can be pushed with ease as long as the push is at the right time and of the correct speed. Furthermore, a 500 lb merry-go-round loaded with 200 more lbs of children can be spun at frighteningly high speeds with very little effort. This is the physics of resonance. By applying force at just the right time, the pushes become additive, just overcoming friction and resistance plus a little more.

A resonant frequency distribution coil, or Tesla Coil, works in the exact same way. Because of the self-resonating circuit, the pulse of electricity is forced through the L1 coil in resonance with the L2 of an increasingly higher voltage. So, after the instant it takes to reach resonance, two things occur.

Firstly, the evenly distributed output voltage wave from the orb or toroid also resonates with the medium which surrounds it. Through this resonance, it has the ability to travel at a very high efficiency. If passing electricity through a wire is like moving water through a pipe, then resonant wireless electricity is like a waterfall.

I built something like this called slayer exciter tesla coil but smaller. do you have a kit for this one or instructions?

Yes, here is the kit to make one yourself: https://drewpauldesigns.com/easy-tesla-coil-kit/

And here you can find complete instructions and abstract: https://drewpauldesigns.com/2018/02/easy-tesla-coil-for-wireless-electricity/