An old friend with a big heart 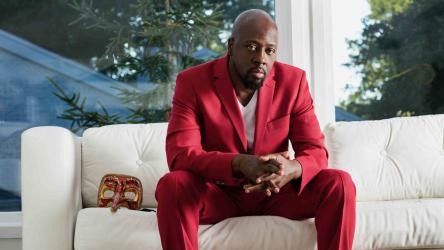 Saw an old friend on a clip from the Super Bowl Pre-Game Concert, reminded me of this:

This man is a phenomenon, a genius and, as I am proud to say, a friend.

I first met Clef in his private NYC lab, Platinum Studios, in 2002. It was a “PR” day and, as broke college student with only enough for a one-way bus pass to NY, I still can’t believe I got the opportunity. Clef struts in, monstrously tall with locks flowing behind him (when he still had the dreads). Dude was a rock star, anyone could tell just by looking at him. Then he sits down at the drum kit and nails the sickest beat, the baddest fill and ends with some sick ass choreographed drum stick trick. He then casually stands up, slides over to a Steinway Grand (if i remember) and tickles the keys like a symphony orchestra’s star pianist. “Pass me a guitar,” clef motions. Next thing we know he is rocking it, not like “Gone Till November” (great song, btw) but ROCKING it! Then, drops the lead in and starts hitting this note-for-note brain melting electric guitar solo and just as we are all trying to put our eyes back in our heads throws that Strat behind his head and continues behind his back. Was he done there? Na! Then he actually finished the solo with his teeth. I know… He picks up the bass on the same beat and thumps that thing like Jerry Wonda was his teacher (he was!) then without even noticeably taking a breath gets on the mic and starts spitting the kind of rhymes no one else could ever “bite” and no one else could ever write.

My man, Evan B, shout out to the 1 VDUB, then grabs a guitar and starts jamming with Jerry Wonda on bass, of course. I at this point am leaning on a desk catching my breath and his engineer or someone says, “Hey, you cool but that board you’re leaning on is a million and change.” … “and change,” he said. That was the first time I had ever even considered the concept of referring to hundreds of thousands of dollars as “change.” My friend Evan, to whom I owe this opportunity, sat and watched the game and chatted with Haitian Jack, Wyclef’s associate and fellow recording artist. I sat with Clef for a bit and told him my story, broke, ambitious and hungry and I just started learning the recording arts. “You’re just like I was at your age,” Wyclef said to me. If he could start here, where I was, and get to there, where he was- maybe I could too. It changed my life. Then he told me something that got me even more excited (but I played it cool), “Ya’ll are cool,’ he said, “You can come back anytime.”

After the PR gig/party/hangout, equipment got shut down, lights turned off and we all crammed into the elevator going down. I am standing in the shadow of a legend, in an elevator close enough to smell his sweat thinking, “this is the best day of my life.” Just then, Clef looks over at me and casually asks, “You guys hanging out?” Now remember, I am a broke ass college student who had been wearing the same jeans for no less than 5 days and he is a world famous, Grammy winning, Platinum selling artist that I had been a fan of for years, knew his records by heart- including even all the skits (“beef?,” “fried hard and shit,” “…in the middle of the hood and don’t know what’s going on?”), intermissions and every single lyric. “Sure,” I nodded. Seconds later the elevator doors open and there is a line of S Class Mercedes out front, all black. Me and Evan piled into an SUV with who, based on his shear girth, was apparently a body guard. We caravanned down the streets of New York like hip-hop royalty. Before the cars stop, doors are opened, red carpet rolled out and we all pile out and walk into the most elegant and exclusive night club that this 19 year old, me, had ever seen. We kicked it, had a beverage, talked to girls way out of our league and left feeling like the world was ours.

Stopped by the studio just about every day that week until heading back home. I heard the story of the breakup of the Fugees as Clef covered the face of Pras on a “The Score” shirt by closing the left half of the jacket worn by an up and coming artist who was ostensibly being produced by Clef at the time. I talked technique with the assistant audio engineer, listened as names like Giorgio Armani (wardrobe) and Burt Bacharach (composer) and, I’m pretty sure, Aretha Franklin (vocalist) got thrown around and enjoyed a meal from a giant foil tray of chicken and rice carried in by a tiny Haitian lady, Wyclef’s mom.

We’ve crossed paths a few times since. I was invited to his shoot for “Midlife Crisis” a few years ago in Ft. Lauderdale and we got a brief chance to chat and talk politics. Its a good thing that didn’t work out if you know about the recent tragedy involving the recent former president of Haiti. And, more recently, stopped by Clef’s show with Evan Brenner not too long ago while he was passing through town on tour.

This guy not only has heart on stage. He wears his heart on his sleeve. He has a heart for the streets. And from me, and the other countless kids from the street like me, my heart goes out to you.

Next
Ok, let me tell you a story.